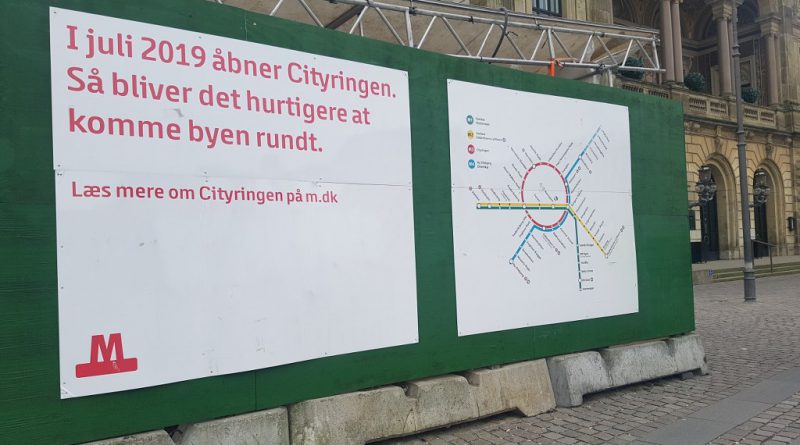 In collaboration with selected municipalities in Copenhagen and Frederiksberg, the Danish government has agreed to expand the existing Metro with a new city circle, which is made up of two lines. A so-called City ring. The coming city circle around the capital consists of 17 new stations in central Copenhagen. All individual stations have their own design, ie to suit the surroundings at street level. The city ring is a brand new Metro line, as the same principles as the existing Metro.

The existing Metro contains the lines M1 the green and the M2 the yellow. When Cityringen opens the lines, there will be a 15 km underground railway – illuminated with clear lamps – under the inner city of Copenhagen, on Nørrebro “in the bridge area” and Frederiksberg. The city ring gets 17 stops underground.

One of the two central stations, Kongens Nytorv, has very close location and connection with Strøget, Nyhavn, Magasin and The Royal Theater. There is a brand new entrance that has replaced an old decline to the original metro.

According to Copenhagen, Old Strand is the oldest part of the city. It then gets a very big lift purely design-wise. There is a connection to Christiansborg, and a walk to Storkespringvandet and Børsen.

In the beginning of March 2019, the small path through the new area was opened. The trail connects the alley and access to the Dagmar theater, hotel The Square. It is located next to the very thoroughfare Town Hall Square.

Perhaps the most central metro will be located a long way from the Central Station itself, but still within walking distance to other S-trains, Regional and IC lines. At the same time, there will be a new connection behind Copenhagen H.

When Cityringens two new lines, M3 and M4, are in use, passengers will be able to switch to the existing Metro at Kongens Nytorv and Frederiksberg stations, ie there is a direct connection between M1, M2 and M3, M4.

A large number of changes to the city’s electricity grid should first be implemented. These took place primarily in 2010 and 2011. Around the same time, archaeologists from the Copenhagen Museum worked on what the museum’s expression “Northern Europe is the largest archaeological excavation to date”. In the following years, tunnels and stations will be constructed. The tunnels are each approx. 15.5 km long. The city ring must be opened in 2019.

The metro station Cityringen will be approx. 15.5 km long underground railway. The city ring will have frequent departures and operate without a predefined schedule – something we are already familiar with on the Metro. The average travel speed through the city will be 40 km / h, stops at stations included.

When Cityringen has two new lines, M3 and M4, are in use, the passengers will be able to transfer to the existing Metro at Kongens Nytorv and Frederiksberg stations. It will also be possible to transfer to the regional train and commuter train at Copenhagen Central, Østerport and Nørrebro stations. The city ring will dramatically reduce travel times. Taking a few examples, a journey from Nørrebro Runddel to Enghave Plads takes seven minutes; from Nørrebro station to Trianglen, six minutes; and from Poul Henningsens Plads to Rådhuspladsen, eight minutes.

It will take about 24 minutes to travel all around the circle line. When trains run in both directions, the longest single trip takes approx. 14 minutes. The city ring will be completed and ready for use in 2019. An update and new articles from Cityringen will follow.